Olivia Carr Edenfield grew up watching the Newton Building being built from her elementary school playground.

Now she teaches there.

Walking into Edenfield’s office is like walking into someone’s home: there is likely hot tea available, and there are pictures, books and knick-knacks warming the atmosphere. You’ll find pictures of author Andre Dubus and a young Flannery O’Connor along the walls and door, while photos of family and friends, including her son and daughter, line the tops of her full bookshelves.

And Edenfield will always greet you with a smile.

Georgia Southern has always been a part of Edenfield’s life. Growing up, she attended Marvin Pittman and would ride the bus through campus.

“This university has been a part of my life all my life. I started first grade here, and so the whole time I was in school, I was aware of Southern. I went to elementary school on our campus.”

Both of Edenfield’s parents were teachers, and Edenfield moved to Statesboro in 1965 when her father started working at Georgia Southern. She said that coming to Georgia Southern was like breathing.

“Georgia Southern has been incredibly supportive of my career,” said Edenfield.

With the instrumental help of President Harry Carter, Ph.D, Edenfield received sabbatical for three years so she could work on her doctorate degree in 1995. GS provided one-third of her pay, kept all benefits and she was able to receive a scholarship.

In the past, Edenfield worked as Governor’s Teaching Fellow for 1995-1996 and a Faculty Development in Georgia Fellow between the years of 1996-1997 and 1997-1998. Receiving these fellowships allowed her to pursue full-time graduate study.

Edenfield finished her courses and took her exams, but she didn’t have her dissertation completed. She said that when it became apparent she wouldn’t finish without relief, she received another sabbatical: a full semester with full pay in Fall 2001. She completed her dissertation in 2002.

All of Edenfield’s university career has been at GS, aside from the one year she taught high school before leaving for the University of Iowa to work on her master’s degree.

“I had actually signed a contract to teach high school again, but Georgia Southern was growing, and I was offered a position, and I’ve never looked back,” said Edenfield.

Edenfield is extremely passionate about her chosen field, literature. She feels that when she and her students come together, there’s an energy in the classroom over the literature.

Education has been a huge influence on Edenfield’s life. Her grandmother and both of her parents were teachers.

Throughout her time at GS, Edenfield has earned a long and illustrious list of honors and awards for her work with students. In 2002, she received the Dorothy Golden Award for Teaching Excellence for the Department of Writing and Linguistics.

Then, in 2016, she was awarded both the CURIO Faculty Mentor Award and the College of Liberal Arts and Social Sciences Award of Distinction in Teaching. That same year, she received the Wells/Warren Professor of the Year Award at the GS 2016 Honors Day Convocation, an honor awarded to faculty by students each spring.

In 2019, she was also awarded the Outstanding Advocate for First-Year Students.

Edenfield held the position of Associate Dean between 2004 and 2010.

Under Edenfield’s leadership with Jane Hoodalk’s guidance, she started CURIO, the advisement center and the live and learn communities with the honors program.

While she enjoyed her time as an administrator and felt challenged, Edenfield received a lot of research projects when she became author Andre Dubus’s authorized biographer. She said she realized that he needed more time than being a full-time administrator allowed her, so she came back to the classroom.

“I had obligations and commitments and needed to fulfill those,” said Edenfield.

Being Director of the American Literature Association takes up a lot of her time as well, so Edenfield felt she had to come back to the classroom to be able to involve graduate students in that and also to be able to tailor her research to her presentations.

This is why it works better for her to be in the classroom, said Edenfield.

“I had also witnessed my mother moving from teaching to administration and never going back, and she encouraged me, that if I felt called to go back, to follow it…She said follow what’s best for you, not what’s best for your bank account,” said Edenfield.

And Edenfield did feel that calling to come back and teach.

“I really believe it’s a calling,” Edenfield said. “It was for me. I feel most comfortable in the classroom. I love to be with my students. They’re curious and just life-affirming. We have such dedicated majors, and every day, when I wake up, it’s the first thing on my mind. ‘What do we teach? What do we get to talk about today in class?’ I mean, that’s just a blessing to get up every day to that.”

Edenfield sets a high bar because she has bright students who want to be challenged. She noted that students rise to the level of expectation.

Edenfield said the most important thing in her job is her students.

“Teaching has always been the most important thing at Southern. We’ve always been student-centered. I’ve seen a lot of changes in 33 years…but one thing I have not seen change is the commitment to students. You get that everywhere: from our department chair all the way to the president. Y’all are the most important thing. I don’t think I’d be happy at a university that stressed anything over students.”

While Edenfield is especially proud of her work in creating CURIO, the advisement center and Miscellany’s “Evening of the Arts,” she is most proud of her students.

“There’s nothing I’ve done that somebody else won’t pick up and probably do better than what I’ve done,” she says. “But I do believe I’ve had an influence on some of my students and that I’ve got students out there in the world doing good work. That I’ve maybe contributed a little bit to their success and their positive sense of self.”

“I ended up doing my thesis on the short story because of her,” said Harris, now a temporary assistant professor in the Writing and Linguistics department at GS.

She first had a class with Edenfield during her final undergraduate semester.

“I didn’t know what I wanted to focus on with English until I took that short story class, and I just fell head over heels for short stories,” said Harris. “So, she 100 percent changed my life in that way.”

Harris also said Edenfield improved her all around and helped her gain confidence in her writing.

Konner Smith, a senior English and Religious Studies dual major, previously worked as a student writing fellow under Edenfield and currently works as her executive assistant for ALA. She expressed how much Edenfield influenced her.

“I’ve literally changed my entire career and education and life path because of her effect. She made me see how fun English is and how fun reading is and how fun it is to learn those things. Just her wisdom and her passion made me so excited as well.”

Smith said it blows her mind how hard Edenfield works as a professor, director of the American Literature Association and as a mom and wife. Smith said Edenfield does them all so well and so joyfully.

Lillie Griffith, Informational Technology major and English minor, added her English minor after taking Edenfield’s world literature course. She said that it was the only course she enjoyed that semester, and Edenfield was so passionate about the works she taught.

“She’s just an incredible person, and she wants to take care of all her students as much as she possibly can—no matter if they’re an English major, minor or not—she doesn’t care about that,” said Griffith. “She just cares about her students and those individuals. She’s just honestly one of the best people of Georgia Southern in general.”

Marci Warren, English major, said that Edenfield isn’t afraid to tell you how it is, which makes it easier to understand things, but that Edenfield is also open to seeing things from a different point-of-view.

When Warren had a hard semester, she had to retake Edenfield’s class.

“After I went to her and talked to her about how disappointed I was in myself, she basically just reaffirmed she believed in me,” said Warren.

Edenfield said that so many people influence her, including her husband, Beth Howells, department chair of literature at GS and especially her students–where she believes her impact on GS lies.

“I feel so blessed to get to come here every day. Now that I’m looking down the road toward retirement, it really makes every day special to be here. This might be the last day I’m going to be in class, so why not go try to have the best day?” 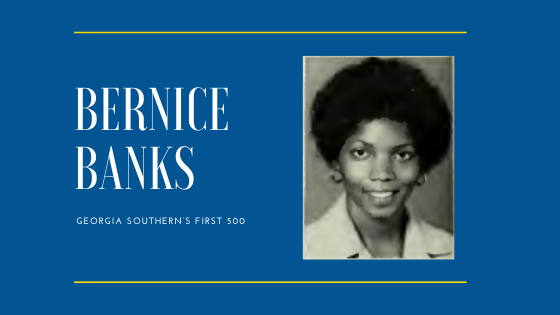 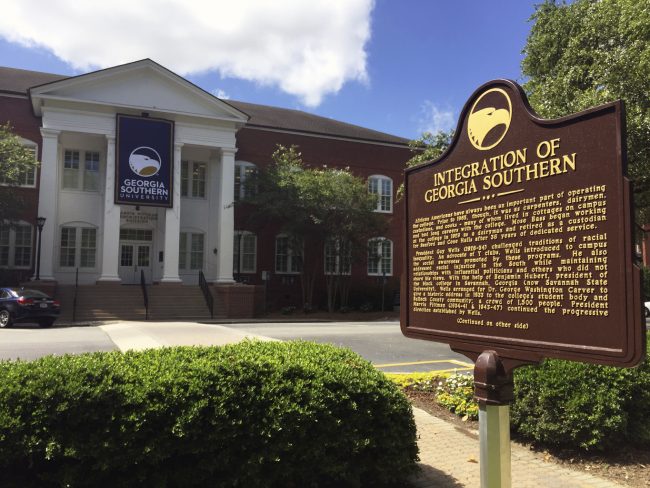